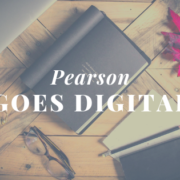 Pearson CEO John Fallon explains that since over 50% of its annual revenues come from digital sales, the company has decided to make Pearson’s learning resources ‘digital first’, as far as the United States college market is concerned. From now on, the British provider of courseware will release its 1,500 active U.S. titles in digital form first, abandoning the previous business model based on revising printed course books every three years. According to Fallon, this model has dominated the industry for over forty years, and thus can be considered past its use-by date. Among numerous other advantages, converting traditional learning resources into digital form enables regular updates of the content, which results in both teachers and students having access to the latest versions of the content, without purchasing new books, since the publishers are able to make changes to the digital versions at all times.
Fallon said: “We learn by engaging and sharing with others, and a digital environment enables you to do that in a much more effective way.”

The company’s decision is also expected to help the 175-year-old firm in its efforts to cut costs. According to Pearson, they will be able to forecast more precise revenue, since students will have less reason to buy second-hand books. As for now, it is estimated that college students in the U.S. already access more than 10 million e-books and courses in digital form from Pearson, since these are often cheaper than traditional resources.

It is our great honor to have a number of Pearson’s foreign divisions use mAuthor – Learnetic’s proprietary authoring tool – to convert existing materials into digital content, as well as create new textbooks, courseware and e-books.