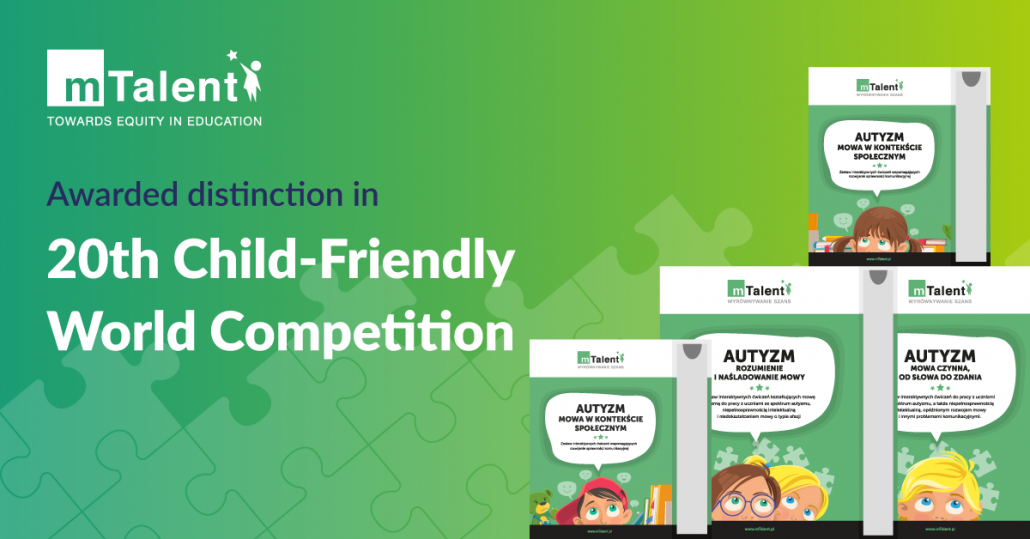 We are pleased to announce that the entire mTalent Autism series (Special Educational Needs – SEN)- i.e., four specialized therapy support programs – received a distinction in the “Education” category in the 20th Child-Friendly World Competition organized by the Committee for the Protection of Children’s Rights (KOPD).

The Child-Friendly World Competition aims to distinguish and reward products for children that significantly affect the cognitive, social, and emotional development as well as the aesthetic sensitivity of the child. The 20th edition of the competition was held under the honorary patronage of the Ombudsman for Children and the former First Lady, Jolanta Kwaśniewska.

In this year’s edition of the contest, the award in the education category was granted to Learnetic – the creators of a series of programs supporting therapy titled mTalent. The following programs of the series were awarded: “mTalent Autism”, “Understanding and imitating speech”, “Active speech, from word to sentence.”, “Speech in the social context, part 1.” as well as “Speech in the social context, part 2.”.

We would like to thank the Commission of the Child-Friendly World Competition for this award!

“Maximal” – a perfect example of a K12 publisher’s independent project...
Scroll to top